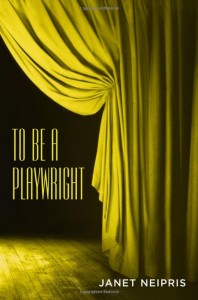 TO BE A PLAYWRIGHT
Writing for stage and screen

Published by Routledge, NYC and UK

To Be A Playwright is currently used in writing programs in leading U.S. Universities and in the UK. The book may be purchased on Amazon, Amazon UK, and Barnes & Noble.

This book is everything I know about writing for theatre and film, as well as living as an artist. It is based on lectures given to writers in China, Indonesia, Prague, South Africa, London, Florence, and guest lectures at universities in the U.S., UK, and Australia.

Many of the chapters are based on essays and lectures given as Professor Of Playwriting, Tisch School of the Arts, NYU, and as head of the Playwriting Unit of the Dramatists Guild Fellows. Chapters include: Fifty Questions to Ask When Writing, Character, Dialogue, Location, Endings, Rewriting, Adaptation, Journals, The Do’s and Don’ts of Dramatic Writing, Critics, “What They told Me” based on interviews with Playwrights, Screenwriters, TV Writers and Fiction and Non-Fiction Writers. The bookend chapters are “The Twelve Habits of Successful Playwrights” and the concluding chapter…

To Be A Playwright is to head into the sun, and expand every day, rather than retract. It’s work which has its origins with us, and therein is original, work that is audacious, which connects, which either breaks the heart or celebrates it.

“With an educator’s care and a playwright’s insight, Janet Neipris has compiled a thoughtful and eloquent collection of her essays and lectures, when taken to heart and properly adhered to, offer the aspiring writer a roadmap to artistic fulfillment.”
~Richard Wesley Chair of Goldberg Dept. of Dramatic Writing, Tisch School of the Arts, New York University

“A lively and informative guide to the craft of playwriting, giving us the tools and courage to survive in this demanding profession.”
~Tina Howe

“This book is indispensable for the neophyte; for the veteran playwright, it is an engaging reminder of the challenges, techniques, and occasional exhilarations of our craft. If I were teaching, I would assign it.”
~Doug Wright