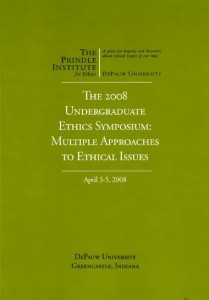 JANET NEIPRIS was one of the main invited speakers at DePauw University’s Prindle Institute for Ethics first annual Undergraduate Ethics Symposium. Representing the Arts, Professor Neipris’s lecture was entitled “The Moral Responsibility of the Artist”. The first publication by DePauw’s Prindle Institute for Ethics, was a journal compiling keynote speakers at the symposium. The 191-page book contains pieces from each of the symposium’s leaders: Janet Neipris, professor of dramatic writing at New York University (“The Moral Responsibility of the Artist”); Thomas P. Kasulis, professor of comparative studies at Ohio State University (“Responsiveness and Responsibility: Bringing a Japanese Perspective to Ethical Discussions”); and Noah Lemos, professor of philosophy at The College of William and Mary (“Value and Variety”), as well as the best student work presented from U.S. universities. A copy of the journal may be obtained by e-mailing Linda Clute at lclute@depauw.edu

This lecture by Janet Neipris has been presented internationally and nationally at some of the following universities:

A moral stance is paramount for the arts – in painting, sculpture, photography, and dance, as well as writing for the theatre or any other audience. We have a moral as well as an intellectual challenge. We are meant to be truth tellers and soul searchers. The arts can and should show us all our humanity.

From “The Moral Responsibility of the Artist” by Janet Neipris