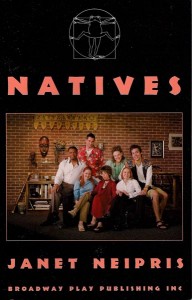 A sophisticated, contemporary comedy about a single woman in her fifties who plans a romantic retreat to France, but is thwarted when her three grown daughters boomerang home unexpectedly, with their partners and agendas in tow.

VIOLA
“This was the summer they all came home. You’ve heard of the movement – the return of the natives, going back to your roots. It’s something like a root canal; only it’s not covered by insurance. “

There’s no such thing as a normal family. Natives is a love story about negotiated acceptance.

“In the play’s often hilarious dialogue, tinged with the harsh bit of reality, one daughter reminds us, ‘ Home is that place where when you go there, they have to take you in.’ In today’s society of overachievers, everybody is determined to keep moving up. Nobody wants a home with roots. Like sharks, we have to keep moving just to stay alive.”
~Tucson Citizen