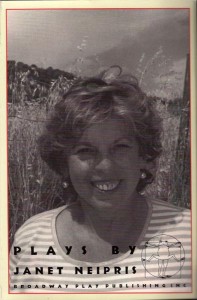 The action takes place in the bar of a big Las Vegas Hotel, a vision of marbleized pink, where Margie and Louis come for a weekend of sex and Sinatra. Although both are a no-show, Margie’s old school chum, Alma does, insisting herself on everyone’s already fragmented lives. An almost comedy.

ALMA
Reflecting on sex … You have to do it in two’s because it’s too sad to do alone”….
It’s a crazy place, Las Vegas. No warmth. It’s the kind of place that makes you miss your kids. I miss my kids. I miss my husband. You should see his face… soft all over and he’s turning gray now, but nice, and he let his hair grow long and he has ridges in his back. At night, when we used to fall asleep, he always put his leg over mine… and I will not lie down with you, ‘cause I don’t even know you, and afterwards you would blow away like a white puff dandelion. And please hurry before I change my mind. But before you go, I would give you a hug, so come here and let me hold you… Come on.

The Desert was written in under an N.E.A grant. It premiered at Pittsburgh Public Theatre and opened in New York at The Manhattan Punch Line Theater, a theater devoted to comedy. For the New York production it was retitled Almost in Vegas, considered to be a better title for a comedy.

“Perhaps the most moving of the plays was Ms. Neipris’ “The Desert”, which brings two women who have been schoolmates long ago in St. Louis, together in a Las Vegas Hotel. Both are a little frightened. Both are creatures of their time and ours, which is full of emptiness for those who are unloved.”
~Elliot Norton, The Boston Herald American

“Neipris is trying to touch something deeper than the funny bone. The play becomes a study of decent people trying to understand their own needs and the lovers who cannot fulfill them.”
~Walter Goodman, The New York Times

“A wonderfully moving and touching play.”
~Patrick O’Connor, Back Stage

The Agreement is a satiric comedy about separation. A husband and wife, cheered on by their respective lawyers, hastily and hilariously divide the spoils of their marriage.

The Agreement was originally commissioned by National Public Radio for the Earplay series, and broadcast on PBS in the US, England and Australia. The cast included Lou Jacobi, Marilyn Sokol, Lewis J Stadlen, Gail Godwin, Jill Eikenberry and Michael Tucker. The first stage production was at the Annenberg Center, Philadelphia.

SIGMUND: The night she left I kept thinking, if I get up the next morning and start the day with orange juice, everything will be okay.

SYBIL: I didn’t stop crying until Indiana. And the moonlight does not shine along the Wabash. The kids were all the way across the country. By the time we got to the Black Hills, I couldn’t remember why we had started out.

“This is a funny and wise play. Neipris has a wonderful eat for the way people talk when they are trying to say the right thing in an unfamiliar and unnerving situation.”
~D J R Bruckner, The New York Times

“Funny and sad at the same time, and that is always a tall order.”
~Nels Nelson, Daily News, Philadelphia

Three American professors come to teach in China the summer before Tiananmen Square. The Cultural Revolution is over, but when Remy, the American professor, attempts to bond with her Chinese translator, Sun, the friendship proves to be impossible for political reasons. Remy means to do good, but fails to understand the cultural differences between the Western world and the Orient. When she tempts Sun with an opportunity to teach in America, offering what she thinks is the expected bribe to the passport officer, she tragically destroys the life of her Chinese friend. A gift is only a gift if you can afford to receive it.

SUN
“I want to go to New York, but I need more papers. My heart is leaping to get my advanced degree. And not selfish, but to soak it in, and then bring it back here. Professor Remy has absolute permission in a letter. How can I humiliate the American offer? I have been popular, obedient, and even dreamed once of being in love with Mao and knitting him a sweater, which proves my loyalty.”

A Small Delegation was written under a Rockefeller grant. Its first U.S. production was at the Annenberg Center, Philadelphia. Original music by Tan Dun and design by Ming Cho Lee. It was subsequently translated into Chinese and produced in Beijing by the China Youth Arts Theatre.

“This compelling play, set in China in 1988, just one year prior to the Tiananmen Square massacre, is a serious study of the political atmosphere of the country during that year. The drama also examines the enormous barriers which hinder understanding between east and west.”
~Gemini Williams, Summer Pennsylvania

Neipris’s method is one of accretion, piecing together a complex mosaic. We come to see each individual in the drama attempting to cope with a political system that seems almost random in its changeability. Neipris’s evenhandedness in dealing with her characters is such that even as we blame the system for Sun’s fate, we also blame Remy, and ourselves by extension, since her instincts are our own. Written from a western perspective, this feels like an inside job in its merging of illusion and reality.”
~Clifford Ridley, The Inquirer, Philadelphia